The Benefits of Electric Vehicles for Motor Fleets


As part of the Climate Change Act of 2008, the government have pledged to work at reducing carbon dioxide emission levels by 80% come the year 2050.

Conservative MP Andrea Leadsom went on to imply that the UK should be working towards ‘net zero emissions’ – a goal she said we should try and achieve by the end of the 21st century. 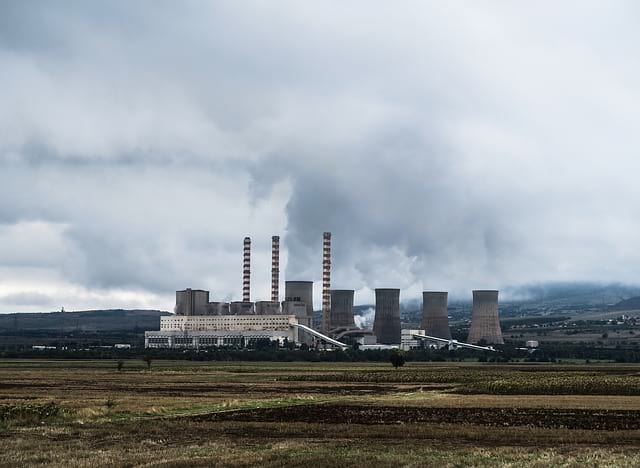 So far the UK is the only country to set legally binding carbon budgets like what is set out in the Climate Change Act, and despite 2050 seeming extremely far away, we have already begun taking action to make our country a more environmentally friendly nation.

Electric vehicles have been slowly creeping onto the scene since 2013, and as they release 40% less carbon dioxide emissions than standard diesel or petrol cars, their presence will definitely be part of the push to better the environment.

According to the Society of Motor Manufacturers & Traders (SMMT), this year there are more than 107,000 of them on our roads.

The first EV to be brought to Britain was the Tesla Model S, deemed to be an incredibly luxurious and premium car with a starting price of £56,400. 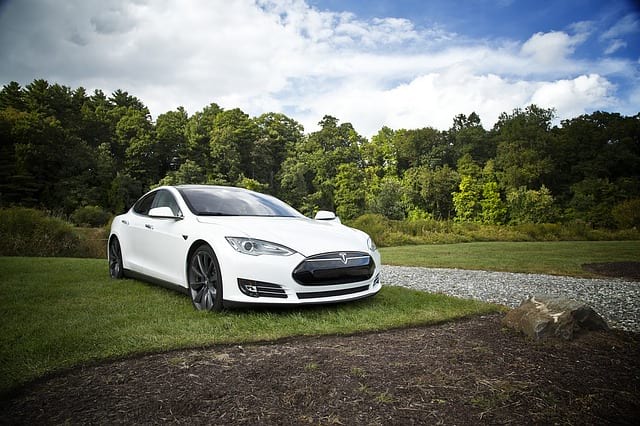 Such a price might discourage eco-friendly enthusiasts as only the wealthiest can afford a vehicle like the Tesla Model S.

However, it unsurprisingly did not take long for other car makers to follow suit, and now it could be argued the Tesla is no longer the front-runner for EV’s as the competition from well-established and lower priced car makers are proving to be much more popular.

For example, iconic models such as the Volkswagen Golf and the Ford Focus now have an identical electric counterpart, and the Mitsubishi Outlander PHEV has been a huge success amongst buyers (almost 30,000 of these models are owned in the UK, making them the most popular electric vehicle).

Manufacturers such as BMW, Kia, Renault and Smart have also brought out their own battery-powered models, meaning that consumers now have a wide variety of choice and will not have to spend upwards of £20,000 – but what about businesses that operate a fleet of vehicles?

Fleet Evolution is a provider of company cars for businesses, and they have written an article explaining the best ways for employers to begin introducing electric cars to their fleet. They said that bringing in electric company cars by using the salary sacrifice scheme would be most beneficial, and lead to a much lower rate of tax.

What Are the Different Types of Electric Vehicle?

There are three options you can choose from when buying an electric car, and they are:

–          Hybrid Electric Cars – these run on a mixture of petrol and electricity, starting the journey using electricity and changing to the petrol-fuelled engine depending on your speed/weight of the load. These types of cars have been around for 20 years, with the Toyota Prius being a classic example of such a vehicle.

–          Plug-in Hybrid Electric Cars – these also run on a mixture of petrol and electricity and can be plugged into external electrical charging outlets when the battery is running low. This kind of car has been in existence since 2012.

–          Battery Electric Cars – these vehicles are entirely battery-powered and do not have an engine, fuel tank or exhaust pipe. They are charged by an external electrical power outlet and produce no harmful emissions.

Electric Vehicles are Becoming More Common in the UK

Earlier this year, the British government announced that they wish to ban the use and creation of new diesel and/or petrol vehicles by 2040, meaning that standard vehicles are actually well on their way to becoming extinct.

Not only this but by 2040 petrol and diesel-powered cars will actually be illegal to use.

Uber are a company who claim their motor fleet already consists of 60% hybrid vehicles, and an article on their website states they have recently purchased 100 fully-electric  Nissan Leaf models to be used by their drivers in central London in order to reduce the CO2 levels in our heavily polluted capital.

Uber is not the only taxi service to go electrical, as Transport for London has also revealed their plans to spend £18m on making the city’s infrastructure much more accommodating for electric vehicles. 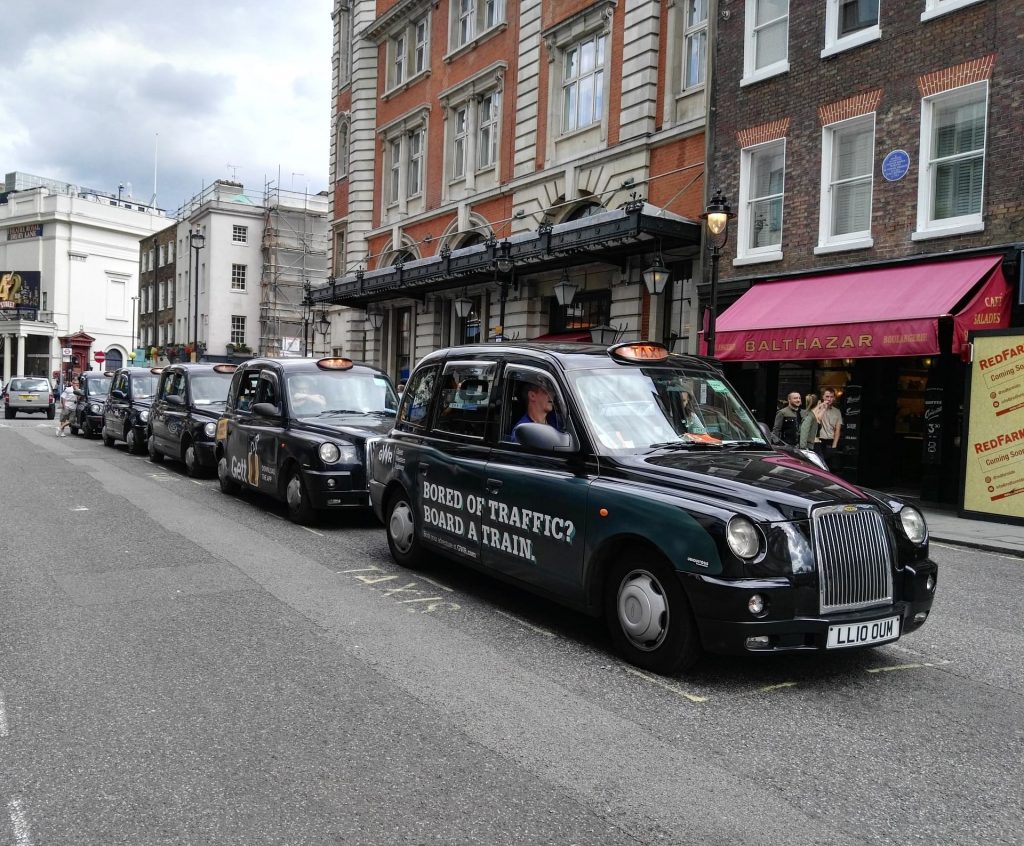 Their plans include launching the first generation of battery-powered black cabs, as well as the installation of 300 rapid charging stations by the end of this decade. We could see electric black cabs operating in London from the beginning of next year.

Go Ultra Low is a campaign that has been set up by an array of car makers, the SMMT and the government, and it was designed to raise awareness about the benefits of electric cars and encourage companies to use them.

The Go Ultra Low campaign so far has a list of 100 participating businesses that have adapted their motor fleet to consist of at least 5% electric vehicles, and members include high-profile organisations such as Britvic, the Manchester Metropolitan University, Santander, Microsoft UK and plenty more.

Katie Colledge-Price, from Microsoft UK, commented “Microsoft started offering EV’s as company cars five years ago, as we could see the relevance of the new technology and the potential long-term cost savings”, and went on to mention that all of her employees are very content with the vehicles.

Royal Mail is another organisation who has purchased 100 Peugeot Partner L2 Electric vans with plug-in chargers. Their fleet director, Paul Gatti, has said that this step has put them on “the front foot for future changes in emission legislation”.

Royal Mail has the UK’s largest vehicle fleet, owning nearly 50,000 cars, vans and trucks, and they are planning on bringing their electric vehicles into service by this December.

Why Should You Make Your Motor Fleet Electric?

The government have made a lot of preparations already so that the transition from petrol to electric cars will happen as smoothly as possible, including spending £38m on fitting public charging points across the UK.

They have also promised to help buyers obtain an EV much easier as they are offering a Plug-In Vehicle Grant.

This grant will reduce the price of buying an electric car by up to £4,500, and for electric vans, the government offer a reduction of up to £8,000 – making now a better time than ever to purchase an electric vehicle.

As EV’s are still somewhat of a minority in the motor industry (they account for only 4% of all vehicle sales), it is likely that their prices will be highest during the first year or so of their release and drop in the future.

A London-based finance team have predicted that these prices could decrease by a huge 77% in the next 10-20 years.

This will be due to the very low long-term running costs of an electric car. For example, petrol currently costs around £1.09 per litre whereas the cost for charging an electric car is between 10-14p per kWh (one kWh is equal to around 3 miles).

Even if you had an electric car with a large battery, such as a Tesla Model S (which has a maximum battery size of 100), the most you would have to pay to top-up the charge would be £10 – which sounds almost unbelievable.

Are There Any Disadvantages to Electric Vehicles for Businesses?

There are only two issues with electric cars which we have recognised as being downfalls – both of which we believe will be rectified once EVs become more mainstream.

One of these issues is the fact that they are not best suited to long distance journeys, due to having a limited battery life, but as more and more of UK drivers switch to electric vehicles we think that public charging stations will eventually become as readily available as petrol stations. 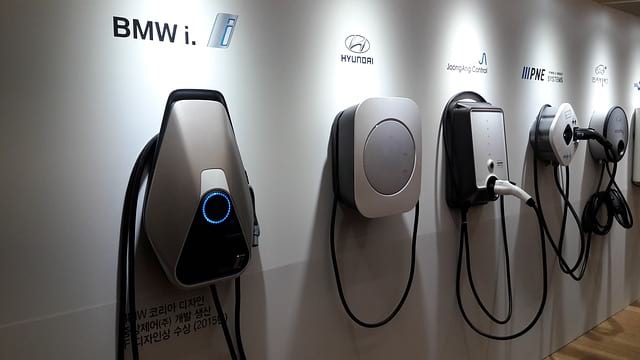 Places such as supermarket car parks are said to be a future hotspot for charging stations.

The other peril is insurance. It’s important to remember that due to the rarity of electric vehicles, there are not realms of insurance statistics out there yet.

The average premium price for an electric vehicle is said to be around 45% higher than that of a regular vehicle, but again, as EVs become more popular it is highly likely that these rates will drop.

Changing your motor fleet to make it entirely or even partially electric would save your business a significant amount of money in the long run, as electricity is an easily accessible and cheap resource.

Electric vehicles have excellent fuel efficiency and no gears, which make them perfect for journeys involving regular stops and starts. We highly recommend that courier and delivery firms consider using electric vehicles for this fact alone.

John Hargreaves, who is the head of fleets & remarketing at Kia, recently said “Based on standard rates, these cars would cost you about £2.80 to do 130 miles” which is a huge difference to the cost of completing the same journey in a standard car.

Electric vehicles are also exempt from the £11.50 a day congestion charge in London.

So far, electrical vehicles seem like a genius idea for any motor fleet business looking to save money, but their benefits actually go beyond cost-effectiveness.

These vehicles encourage and promote eco-friendly safer driving, which would lead to your company being perceived by customers as more reliable, innovative and modern. Your drivers will be recognised as responsible and forced to practise safer driving, due to the fact that electric cars are less powerful and consequently cannot reach the same speeds as standard cars.

There is also the fact that many, many more years down the line; our great-grandchildren will live longer and healthier lives.

Martin Quail, the chief commercial officer of leasing company Alphabet, commented: “The image of the brand can be bolstered if people can see that the business is working towards an environmentally friendly fleet composition”.

Electric vehicles are becoming more and more prevalent in the UK, with both individual motorists and businesses warming to the idea of saving money and doing something positive for the environment.

If you are looking to renew your policy protecting your fleet of drivers, please do not hesitate to contact our team of experienced brokers today to obtain your free no-obligation quote.