PM To Spend £30m on Creating Disaster Insurance for Africa


On 8th July 2017, at the G20 summit in Hamburg, Theresa May unveiled her new support package plans for Africa, which she believes will help unlock the economic potential of the continent in the long run.

The plan, however, is significantly different to anything the UK has ever seen before – and it has raised many eyebrows and strong opinions.

What the plan entails?

£30m will be funded into insurance premiums (providing coverage from natural disasters) over a 4 year period, handled by British insurers, with hopes that African firms will eventually be able to take over the schemes and become self-sufficient.

Below are several of the most important investments the PM hopes to make:

May has also explained that the long-term goals of the plan consist of three points:

Altogether, the PM will be donating a controversial £228 million to the new Africa support plan.

The Prime Minister announced in the Hamburg conference that a new establishment to be known as the London Centre for Global Disaster Protection is set to be launched within the City of London.

It will utilise the expertise of the insurance market, and May’s goal by 2020 is for 400m extremely vulnerable people to have adequate insurance. The government have commented that this will be a “more cost effective, rapid and reliable” way of raising finances rather than disaster aid.

The government hope that the insurance policies being developed through the City of London may eventually offer up to £2bn in protection, ensuring that should disaster strike, the citizens are not trapped in the dreary cycle of poverty they face at the moment.

When poverty-stricken countries are victim to a natural disaster, such as a severe flood or hurricane, they do not have the financial means to rebuild themselves efficiently – and this is something the support plan aims to change. 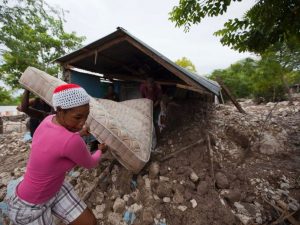 Above: A local dealing with the after effects of Storm Erika.

The proposal came as a surprise to many people, as rather than the money being spent on traditional resources such as mosquito nets and clean water wells; the PM has explained it will be channelled into private British insurance companies.

Max Lawson, who is senior policy advisor at Oxfam, has openly doubted the PM’s ambitious plan.

He labelled it an “interesting idea”, but felt it was extremely important to remember that “growing economies will not automatically provide people with enough food to eat or life-saving medicines”.

Lawson also added that the plan must be “judged on the benefits it provides for poor countries, rather than the City of London”.

What about the UK?

After Ms May had revealed her plans for the foreign aid budget, tempers flared all across the UK as many angry taxpayers deemed it unfair.

Our PM has been under fire previously regarding budget cuts to authorities and the NHS, which has left a large number of people suffering greatly – particularly those in North London, including the Great Ormond Street children’s hospital.

Andrew Vine, The Yorkshire Post author, has stated that “sending billions abroad – even to the most deserving causes – appears impossible to justify whilst honest, hard-working people here at home are struggling”.

The UK is one of the few 6 countries which meet the UN target of donating 0.7% of our national income to foreign aid.

Tory MP Philip Davies was outraged at the Prime Minister’s plans. He deemed it “unjustifiable” and “grotesque”, adding “Many of my constituents, who have suffered horrendously as a result of flooding, will be disgusted that people in other countries appear to be a bigger priority for our government than them”.

Mr Davies’ Shipley constituency in West Yorkshire faced severe weather damage following the horrendous 2015 floods across the UK, and many hard-working tax-payers were infuriated to learn that the government will be spending their money on insuring other countries when many British families still struggle to afford basic yet necessary insurance policies. 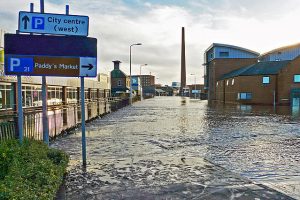 Above: The severe floods which hit the UK in 2015.

May told journalists “We must not forget that progress in Africa benefits the UK at home…this is the future of aid, delivering value for money for the taxpayer”. She has also underlined how in the long run, a financially booming Africa would lead to profit the UK’s wealth.

The industry suggests that around four million British families currently do not have home insurance – they either cannot afford the rising premiums or are being rejected by insurers due to living in flood-prone areas. Why is funding not being propelled into strengthening our weather-damage defences first, or insuring our citizens who desperately need coverage?

Insure 24-7 believes that offering tailored insurance policies to our clients is hugely important so that you are free to choose exactly how much coverage you specifically need and for what matters.

Please do not hesitate to contact our property insurance brokers for a free, no-obligation quote today.